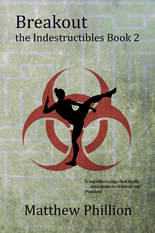 The Indestructlbles -- Solar, the Dancer, Straylight, Fury, and Entropy Emily -- saved the day more than a few times last year, and the world took notice. When Doc, their mentor, went missing, the five teenaged heroes did their best to make the world a better place, stumbling from adventure to adventure without an overall strategy. The general public seems to be cheering them on, but a shadowy government agency lurking in the background, wants to round them up and force them to play by their rules. And they aren't going to take no for an answer — even if it means making an example of the young heroes. Meanwhile, a bigger threat, an escaped experiment who spreads sickness wherever he goes, is working his way toward the City to meet the Indestructibles head on, blaming them for what he has become. With Doc Silence gone, Fury apparently missing, and the Dancer slipping away into her own silent brand of vigilantism, will Solar be able to hold her team together in the face of this looming threat? And who is the mysterious, neon-pink haired stranger who keeps appearing and then disappearing like an illusion on the Indestructibles' flying base? The Indestructibles have become a national sensation — but will they survive the fame? Tune into the sequel The Indestructibles: Breakout to find out for sure.

The Entropy of Everything (the Indestructibles Book 3)

Time travel is a long-standing tradition among superheroes, and so when Anachronism Annie, a friend and ally of Doc Silence, asks the Indestructibles to journey with her to save an alternate future where everything has gone terribly wrong, the team agrees. In this other timeline, a few small decisions have led to a much darker and more tragic world, and the adult versions of themselves the Indestructibles meet—Solar, the Dancer, Straylight, Whispering, and Entropy Emily—are nothing like they expected. Are they heroes? Martyrs? Or perhaps even villains? And what happens when the young Indestructibles discover that the alternate future’s version of one of their own team has been turned into the very weapon that will be used to destroy the whole world? Can they team up with these darker versions of themselves to save an entire future? It's said that when you time travel, you can never come back the same. How will journeying through time change the Indestructibles? Will they ever be the same? The Entropy of Everything is the third book in the Indestructibles series.

The Indestructibles: Jane, the solar-powered girl; Kate, the ballerina vigilante; Billy, who shares his brain with a cosmic-powered symbiotic alien; Titus, a werewolf with confidence issues; and Entropy Emily, a Whovian with a black hole where her heart should be — together with their mentor, the magician Doc Silence — have saved the world from a sentient hurricane and a living plague. They've even traveled through time to rescue an alternate timeline.

But now they face their greatest challenge yet: a messenger from the stars, a creature with powers just like Billy's, has crash-landed on Earth with a warning of a pending alien invasion. The young heroes must rally their forces and turn their attention to the stars.

It's all hands on deck as the Nemesis Fleet, an armada of living ships and ancient, parasitic, mind-controlling creatures, speeds toward Earth like a hive of locusts. Enemies become allies and friendships are challenged as the Indestructibles try to pull out every trick in their arsenal to save the planet.

Like a Comet is where the Indestructibles stop being students and start to become the heroes they were destined to be. But will they be strong enough?

The Crimson Child (The Indestructibles Book 5)

​Since the beginning, Doc Silence has warned the Indestructibles, his team of super-powered protégés, that magical threats would be the most dangerous. The team has faced down alien invasions, time traveled to post-apocalyptic futures, and more since they first banded together, but now, for the first time, they are confronted with not one but two sources of dark and dangerous magic.

Together, Jane, Billy, Kate, Titus, and Entropy Emily will go up against an evil necromancer, warping his victims into weapons in a reckless pursuit of wealth; and an even stranger threat, a young girl with inherent mystical abilities who has become a pawn in an interdimensional power struggle. When an entire town disappears, the Indestructibles – a solar-powered girl, a boy with an alien in his mind, a ballerina vigilante, a werewolf with confidence issues, and a Whovian with a black hole where her heart should be – must band together with new allies to stop dark forces far beyond their comprehension.

This is their greatest challenge and most personal mission yet. Has all their training been enough to prepare them?

Matthew Phillion is a writer, actor, and film director based in Salem, Massachusetts. An award-winning journalist by trade, he has also appeared in feature films including the sci-fi romance Harvest Moon and the independent horror flick Livestock. His screenwriting and directing debut, the romantic comedy Certainly Never, premiered in 2013 at the Massachusetts Independent Film Festival, where it was nominated for five awards including best screenplay and best New England film. An active freelance writer and journalist, Phillion continues to write about both local issues and the medical industry.
Proudly powered by Weebly